Debrief from the ISSF World Championships in Croatia

"The weather was cold and very changeable for the time of year. The ‘Pampas’ range in Osijek, Croatia reminded me a lot of East Yorkshire GC with a backdrop of mature trees providing an excellent background for locating targets. With Trap Juniors underway and 81 countries taking part, ‘unofficial’ pre-event training was very limited and was a daily scramble to secure training slots for the next day. The day of ‘official’ training provided some respite with a sensible approach of having all athletes from the same country, men & women, on the same squad.

Readers must remember these athletes are all selected National Team members, a maximum of 3 Men & 3 Women, per event. It’s not possible to simply enter as an Individual. The strength in depth in modern ISSF shooting is very high with a significant number of Professional athletes, in well funded teams having in excess of €1m per annum to develop and manage the elite end of the sport. Due to the numbers involved, 154 in Trap Men and 79 in Trap women, even with 5 ranges, the individual competitions were scheduled over the very challenging format of 3 days, 50, 50 & 25 targets plus finals.

In Trap Men, Day 1 saw a great start from Derek Burnett with 49/50 placing him very close to the top of the leaderboard. Unfortunately Derek would slip back over the following 2 days to finish 114/125 and a tie for 67th place. Mick Ward had a steady competition finishing 112/125 in a tie for 85th place, you could see Mick grow in confidence over the last 2 rounds. Wayne Byrne was in significant pain from a muscle injury in his back. Indeed it was a challenge if he should start at all. After 2 rounds it was abundantly clear he could not continue and had to withdraw. The rush was now on to have Wayne’s back worked on daily in an effort to try and get him ready for the Team competition on the final day. In Trap Women, Aoife Gormally got off to a slow start but to her credit, reset and finished the competition for 110/125 and a tie for 35th place.

Trap Mixed Team saw Aoife & Derek on the starting line, with steady scoring finishing 27th of the 56 teams, a pairing of much potential.

The final day of competition was the Team events, Trap Men & Women. With only 1 athlete in Trap Women, it was up to the Ireland Men to fly the flag. Thanks to the Physio’s of Poland and Germany, they managed to ‘patch’ Wayne together to compete and compete he certainly did.

Wayne shot a perfect 75/75 only matched by double World Champion and multiple Olympian Eric Varga of Slovakia. With Mick on 71/75 and Derek 67/75, the team finished in a magnificent 6th place only 2 targets short of an opportunity to compete for a Bronze medal. For a nation largely still amateur, this was a terrific result, leaving many of the Pro’s and wealthily teams in their wake. A fitting conclusion to the WCH, the irony being it looks like in 2023, that 6th place finish would give them an automatic place in a Bronze medal match.

So there much to reflect and take forward into a 2023 season which sees another European Olympics (3rd European Games) and also sees the heat ramp up for those elusive Olympic Quota places for Paris 2024.

I think it fitting to finish with a few words from Wayne Byrne...

“From a bad back to 75 straight. Big change in just a few days. We had a team chat the day before and as a result I relaxed my eyes more. Made a big difference on the day. Delighted to get my first 75 and to do it at a World Championship. Unbelievable stuff!! Now to get this back problem fixed as it’s come back again since I got home.” 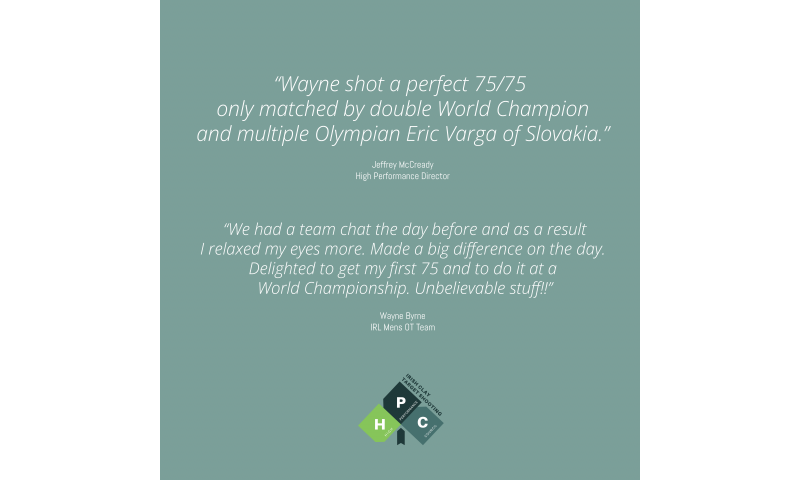 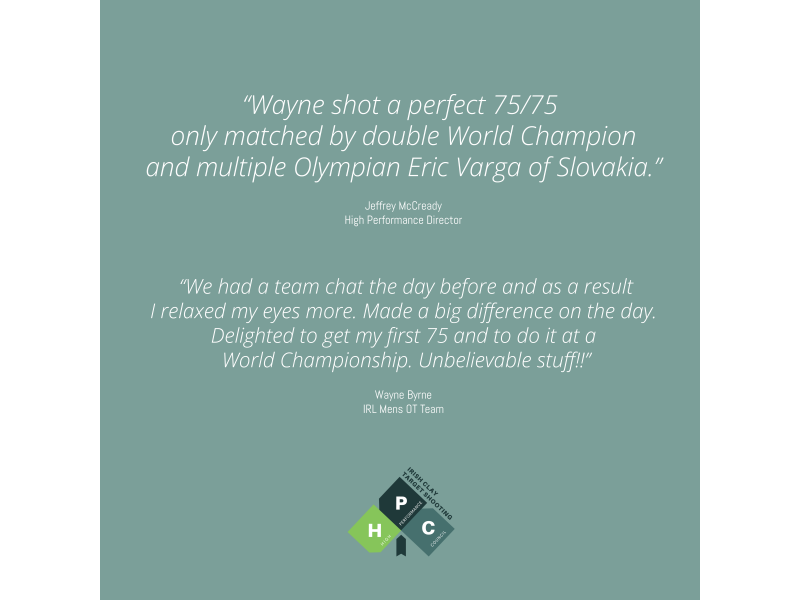